It is important to understand how bookmakers make money because it helps us understand what it takes to beat them.

Let’s start with an example: A game between Manchester City and Manchester United on April 17th, 2017.

As you can see, different bookmakers offer different odds on the same game. 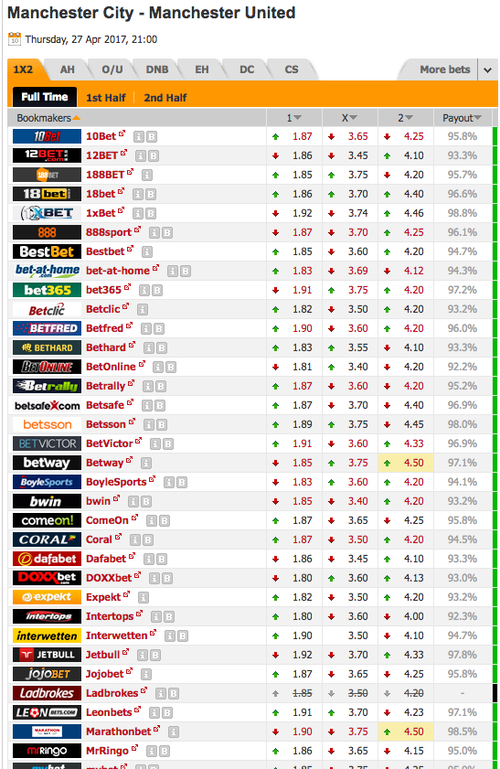 The reason why this happens is because there are different opinions on what the probabilities are for either of the teams to win or lose.

Bookmakers make money by having a certain margin on each bet we (as bettors) place through their website.

Their expected revenue equals their margin, multiplied by the number of bets coming through their platform, times the amount of money bet on each game.

THE BOOKIES HAVE A MATHEMATICAL EDGE OVER US

In every single game bookmakers offer odds for, they make sure to have a mathematical edge against the player. 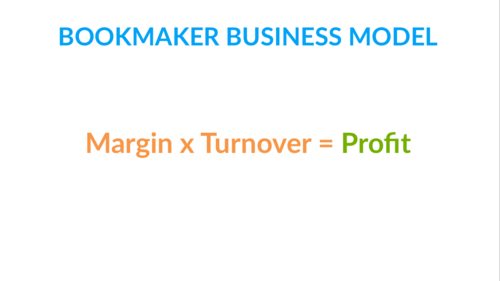 And this margin is what enables them to make money. It is also seen in casinos. If this wasn’t the case, they wouldn’t have a very successful business model.

Essentially, the bookmakers give themselves this mathematical edge by offering lower odds than what they actually believe the real probabilities are. Here is a a clear illustration: 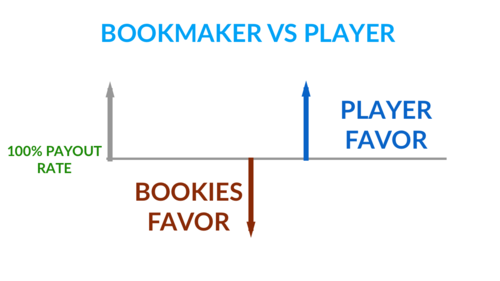 Odds are also another way to express probabilities. The odds are the inverse of probability. 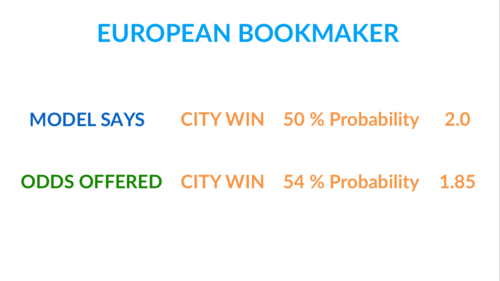 There are many services out there that allow you to compare odds offered by different bookmakers, and the majority are free.

Sticking to the same game, as you can notice, these two bookmakers have different odds on a Home win, Draw and Away win.

If you would like to learn more about these concepts, please check out this article. 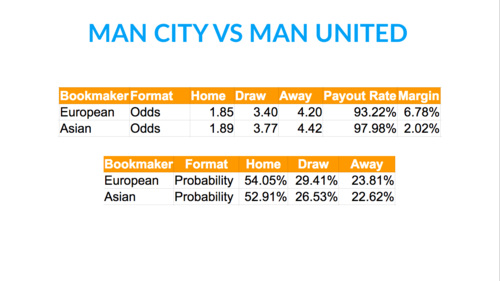 On the other hand, the Asian bookmaker is offering higher odds on the home team to win, a draw and for the away team to win.

HOW DO THE BOOKMAKERS COME UP WITH THESE ODDS?

Some of the bookmakers calculate their odds in-house, so they have odds experts who look at a bunch of different factors to come up with a number that they are comfortable with as the probability of a team winning.

Now, how exactly they calculate these probabilities will differ depending on the company or the different odds experts as well.

Some of the factors they take into consideration could be the team's lineups, whether or not there is an injured player on the team, their position in the league table, how well have they been playing lately or their winning streak, losing streak and so on.

So, the point with this is not to say which factors they use and how they weight these factors in order to come up with these probabilities, it's just to point out that there are a lot of different ways to do it and these are some of the inputs that go into these models.

The good thing is, is that there are a lot of different opinions on how to calculate these probabilities, this is why you see that different bookmakers have different thoughts.

They have different opinions on what they believe the underlying probabilities are, but what they all have in common is that they will take a margin on the different outcomes of the games.

THE DIFFERENCE BETWEEN EUROPEAN & ASIAN BOOKIES

No matter what type of bookmaker, each bet placed with a bookmaker has a margin.

Now, this is multiplied by the turnover and this gives them the profit. 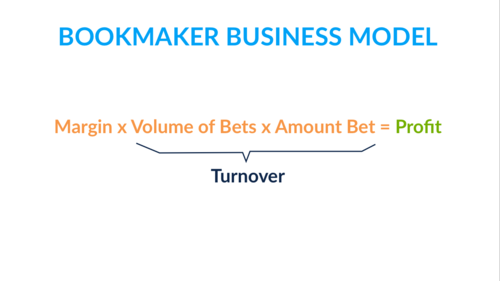 So, turnover can further be broken down into the number of bets, times the amount that has been bet.

A bookmaker makes profits by having certain margins on each game, independent of which outcomes the players bet on.

Now, because the bookmakers have this margin, this means that in order for a player to be profitable in the long term, they need to have an edge against the house.

But, as we saw in the example of Manchester City vs. Manchester United, the European bookmaker had different odds to the Asian bookmakers and in general, had a lot lower payout rates.

So, basically what this boils down to is that the European and the Asian bookmakers operate with different business models.

You could describe European bookmakers as decision makers. They typically have an in-house odds team that analyse which team at which % probability, will win the game.

For instance, if $1m is bet on Manchester City winning, they will hedge that out by either shifting their odds to attract more potential bettors to put money on Manchester United or they can lay off the bets at an exchange or other bookmakers.

So let's say that both of these bookmakers want to make a $1m profit. Now, because they operate with different business models they are going to have different ways of achieving this.

So if you're selling soda, you can sell 1 million bottles of soda and only have a margin of $1 on each soda you sell, which gives you a profit of $1m.

While if you're selling 30-year-old whiskey, let's say the margin on each bottle of whiskey is $100,000, then you need to sell only ten bottles in order to reach $1m in profits.

In other words, the Asian bookmakers operate by having higher odds, because their margins are lower, which gives them a higher turnover.

While the European bookies operate by having a higher margin but they have lower turnover.

Now, to attract the sharp traders they also offer higher maximum stakes so the sharpest bettors in the world and betting syndicates will do all of their bets through the Asian bookmakers. 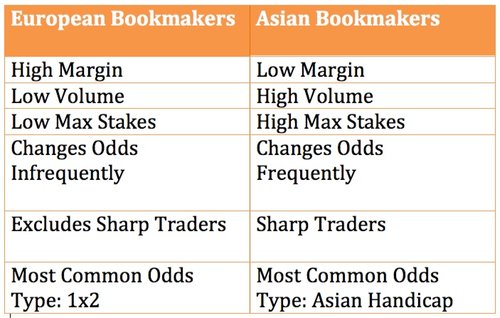 Even the best betting syndicates and professional sports bettors such as Jonas Gjelstad will only have a low ROI per bet, so in order for them to make thousands in profits, they need to have a turnover in the hundreds of thousands.

Another difference between them is that the most common odds type with European bookmakers is 1x2, so basically betting on the end result of a game. While with the Asian bookmakers typically remove the draw and use Asian handicaps.

Now, since the Asian bookmakers are almost purely market-driven, their odds will change much more frequently because they're constantly trying to balance the books.

Suppose they get in a large bet on one side. This will cause the odds to drop and then it goes up on the other side, just like a lever.

In these markets you have all these sharp traders which are constantly looking for value in the market.

If they believe that Manchester City to win is currently undervalued, they'll place bets on that line forcing it to drop and so the odds on Manchester United win will increase.

Here you can see an example of what this looks like from a cup game between Chelsea and Manchester City.

Now, there might be different sharp traders out there with a different model.

This will keep going until the game starts and then finally an equilibrium will be created, where everyone's happy with the current prices, this is when we say that the market is efficient. Read more about the efficiency in sports betting markets here.

This is also why we say that markets are more efficient closer to kick off than they are early on, because at this point in time all the money will have moved through the market, so you could view it as money = information.

People who wager that amount of money and don’t know what they are doing, won’t last long before they go broke. Only the sharp players will remain over time.

THEY EVEN ADVERTISE TO DIFFERENT CUSTOMERS

What you'll also see is that these different forms of bookmakers cater to different customers.

European bookmakers target the average Joe that just wants to place a bet on his favourite team to win this weekend, and doesn't think very much about the odds that they're being offered.

This means that the bookmakers can get away with giving odds with a high margin, that have poor value for the players.

While the sharp traders or bettors are a lot more price sensitive, so they only bet when they get really good odds and when they believe that there is value in these odds.

Another way that the European bookmakers have made sure that they don't attract the sharp bettors is because the limits they have on the different games are a lot lower than all the Asian bookmakers.

Now, as we mentioned earlier, because you want to make a profit in the thousands you need to turnover hundreds of thousands, and if you're only allowed to place, for example, $5 on a game, you're going to need a very high volume of bets in order to get there, so it becomes very unattractive for the sharp bettors.

The main takeaway from this article is that in order to beat the bookies and be profitable, you have to identify when their odds are mis-priced compared to the underlying probability, what we call a value bet.

This value bet also has to be large enough to overcome the bookmakers margin. Luckily, the Trademate Sports software does all of this for you automatically. So the only thing you have to worry about is placing the trades yourself!

What is a Bookmaker's Margin (VIG) and Payout Rate?

How Bookmakers Profile Winning Players And Thoughts On Tipsters

How Bookmakers Create Their Odds From A Former Odds Compiler