Written by Dan Abrams from Playing Not To Lose

Experience is a tricky thing. It builds up a valuable internal measuring stick that we call “intuition,” and that helps us decide between the right way to do something and the wrong way. If your experience has helped you achieve your goals in the past, it’s easy to take your intuition for granted and never question it. But, the best way to learn new things (and to constantly improve) is by questioning. For sports bettors, this can mean asking as simple a question as “is it always a mistake to make a -EV play?”

In a recent educational video from Betting Talk, Elihu Feustel warns us about some common mistakes that beginning bettors make, like hedging, chasing, and locking in profits on existing bets. His logic goes that since these bets against your current position are often -EV, they must therefore be bad plays. He does not, however, discuss how to minimise the risk associated with letting your existing bets ride. In order to illustrate his point, he answers several questions from beginning bettors about typical situations in which they’re tempted to bet against their own existing trades. Rather than simply accepting the conventional wisdom that he advises, let’s question it and do the math on a couple of these examples using Theoretical Kelly Optimization (TKO) analysis to see what play actually maximizes your EG or expected growth (which I explained in this previous post). This play will be the one that best conforms to the math behind the well-known Kelly Criterion.

Taking profits before the last leg of your parlay

In one example, he looks at the case of a bettor who made a 4-team parlay (aka, accumulator) for one unit that will pay +1000 (11.0 in decimal), or 10 units of profit. We don’t know whether this existing bet was +EV when originally made, but the truth is that doesn’t matter when deciding how much to hedge against it. All that matters is: the true win percentage of the hedge bet, the odds offered on it, and the amount of potential payout your existing position has. Let’s assume some reasonable numbers for these variables in order to correctly analyze this spot.

p = probability that the bet wins

If you ask Elihu, he would say that since this bet is -EV, placing any amount on it would be a mistake. If this were the only bet you needed to account for, then John Kelly probably would have agreed with him, since the fraction of your bankroll to stake according to the Kelly Criterion formula must also be negative. Thing is, his formula was derived for the case where bets are only made sequentially on individual trials, and the bettor’s bankroll is adjusted for the outcome of the previous bet before making the next one. These are natural assumptions to make when flipping a coin over and over or only betting on one side of one sporting event at a time. But, they don’t apply to the case where you have an existing bet and you’re considering trading out of some or all of it. In that case, the ending size of your bankroll will depend not only on the outcome of the new bet, but also on the potential payout of your existing bet.

If we try to maximize our EG by solving the independent Kelly Criterion equation, we will see that the optimal fraction to wager is -1.1%, meaning don’t bet anything:

f*= fraction of bankroll to bet

However, as I’ve previously proven with my TKO method, when making an opposite side bet (i.e., a bet that must win if your existing bet loses, and vice versa) we have to also account for the potential payout of our existing position. In this case, that’s 11 units (the one unit bet, plus the 10 unit profit), or 11% of our bankroll. Therefore, the applicable Kelly formula and the correct optimal fraction for this example is: 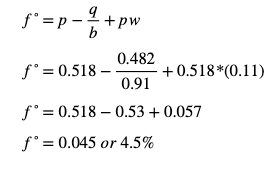 Despite the fact that it feels wrong to give back some EV in order to minimize our risk, the real way to optimize our EG is to bet 4.5 units on Team B as a hedge. This way, if Team A covers, we take a 5.5 unit profit (instead of 10 units if we’d let it ride), but if Team B covers, we have a 3.1 unit profit (by winning 4.1 units on our hedge bet, but losing the initial unit bet on the parlay). We still do better when Team A covers, but we lock in at least a 3% profit rather than taking our chances on either a 10% profit or one unit loss. Note that it’s not only more comfortable to reduce our variance like this, it’s mathematically correct in order to best grow our bankroll. By being sure to have more in the bank than we started with when we find our next +EV bet, we can often bet more money on it and make more profit in the long run.

Another example that Elihu addresses is a case where a bettor has taken Team A at -250 (1.4) pregame, but during the game he can find a line of +300 (4.0) on Team B after Team A scores. The questioner doesn’t give us any more information than that, but Elihu warns that both bets should be treated as individual bets, so unless the bet on Team B is +EV by itself, it’s a bad play. However, these bets are not individual. In fact, they’re 100% negatively correlated, like the accumulator leg and the hedge bet we analysed in the first example. In order to determine the correct play, we have to know how much we have at risk from the existing bet and how much the vig on Team B actually is.

Let’s assume that the hero is a sharp bettor who found a 3% edge on Team A pregame. Wanting to grow his bankroll in the quickest way, he staked this bet at full Kelly sizing of 7.5% like so:

Now, when Team A takes an early lead, he wants to lock in some profit by betting on Team B. If he calculates that Team B’s true win percentage is 24%, so that the fair line for Team B is +317 (4.17) at that point, then there will be a negative edge on Team B, like this:

That’s a pretty large negative edge to overcome, but because he stands to collect 10.5 units if Team A wins, will it make sense for him to hedge at least some amount against his current position? We can again use the opposite side Kelly formula, like so, to find out: 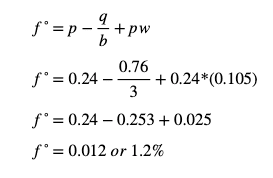 So, in this case, the optimal amount to hedge is 1.2 units. That’s not enough to guarantee a profit, but it can stop the hero's potential loss on Team A at around 4% instead of 7.5%. Do you see why? If Team B’s true win percentage were 23% so that the fair line for Team B was +335 (4.35) instead, then the price he’d have to pay to hedge would be too steep to make betting any amount correct: 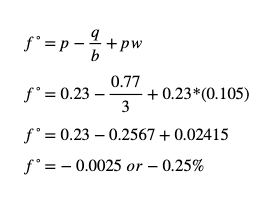 As the second example implies, often the best way to win long-term is to lose less when you lose. Losing hits your bankroll twice as hard, because not only are you out the money, but you also start with less of a bankroll to stake on the next +EV opportunity you find. While full Kelly staking on individual or “naked” bets will eventually lead to some very wild swings, even if you’ve estimated your edge correctly, full Kelly hedging tames those swings and makes them mild instead by reducing your variance. So, +EG hedge plays can help you sleep better at night while also optimizing your bankroll growth. If you ask me, focusing your energy on finding more of them is a win-win!