Written by Dan Abrams from Playing Not To Lose

In a previous post, I demonstrated how the conventional wisdom of “any bet that is –EV must be a bad bet” is really just a myth. Another example of conventional wisdom that should be examined more closely is the idea that the larger hold percentage in multiway markets makes them much tougher to beat. In markets with more than two choices, like EPL futures markets or outrights for a golf tournament, the total hold (or margin) is typically much larger than it is for a two-way market when the break-even percentages for all selections are summed up. At sharp books, it can be in the 15-20% range, and at soft ones it can be 30-50% or more. What a rip-off! It seems like those greedy books are charging each bettor a much larger vig to bet in those markets. But is that really true? As they say in the sports world, let’s break it down.

The first thing we need to do is figure out how the line on each individual runner compares to its corresponding vig-free line. The traditional method of calculating the vig-free line is simply converting each line to a break-even percentage, divide it by the overround (e.g., 120%, if that’s what the implied percentages add up to), and then turn it back into odds. For example, a 1.91 (or -110) line on each side of a two-way market has a break-even percentage of 52.4%, and the total implied probability of that market is 104.8%, so the vig-free probability is simply 52.4%/104.8% = 50%. Thus, the fair line is 2.0 (+100) in odds. And it works the same way for all odds, right?

Well, for that hypothesis to be true, the favorite-longshot bias (FLB) would have to be false. But, there is ample evidence to show that it’s a real effect at sports books. The FLB states that the vig isn’t distributed in proportion to the odds, but instead a higher proportion is placed on the longshots. So, in order to calculate the vig-free lines, we need to model the distribution of the margin in the correct way. One thoroughly tested way to do this is to assume that the break-even percentage is determined by adding the same small percentage to the true win percentage of each runner in the market before converting into odds. This distributes the margin equally in absolute terms over each runner (as described by Joseph Buchdahl in his book Squares and Sharps, Suckers and Sharks), so that what you would expect is a total margin for the market of n*m, where n is the number of runners and m is the margin added per runner.

In our typical two-way market example, m= 52.4% - 50% = 2.4%, so if we extrapolate that amount of margin into an 11-way futures market, then we should expect a total margin of about 11 * 2.4% = 26.4%. Obviously, with that many runners, some of them will usually be extreme longshots, and their lines won’t support 2.4% margin (or else the odds would be capped at around 40.0, even for runners with 0% chance of winning). So, with reduced margin applied to the longer shots, one might expect a total margin of about 20%.

That’s exactly what you’d have found a few months ago if you had looked at the odds for the Eastern Conference winner in the 2021 NBA playoffs. Shortly before the playoffs started, 11 teams were still in contention, with the Brooklyn Nets posted as prohibitive favourites. Based on the following odds from DraftKings, the overround was 118.6% (i.e., the market had 18.6% margin or hold). Hypothetically, if a field bet vs. the Nets had been offered as a two-way market, we can presume it would have had a line around 1.935 (-107) and a two-way market margin of 4.5%. I backed out the margin from each line approximately according to the method above, and ensured that the total true win percentage came out to 100%, for both the two-way and multiway markets. My results are in the following table: 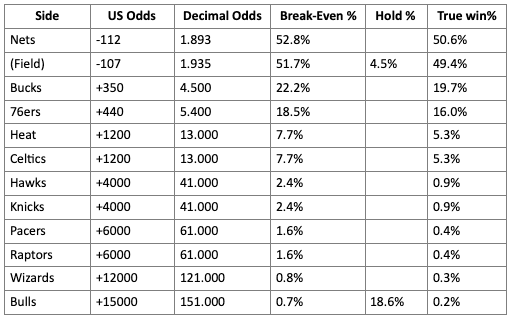 In their book, The Logic of Sports Betting, Ed Miller and Matthew Davidow lay out a simple example of a very dumb strategy in a multiway market with this level of hold. It says that if “you build a bet chooser program that randomly chooses bets from a multiway market with a frequency weighted to the odds of the bet…. you’d lose that massive hold percentage over time. So don’t do that.” Since nothing makes me want to do something more than someone else telling me not to, I did just that. I built a simulation that would randomly bet on each of the 11 teams with the frequency of each bet pegged to their true win percentage. (I assume this is what they meant, since if you weight the frequency based on the offered odds and their implied percentages, it comes out to over 100%.)

One method for which I can’t assume what they meant is this: how much should you stake on each bet? It seems intuitively obvious that it would truly be very dumb to use a flat staking strategy here, risking one unit on the Nets 50.6% of the time and one unit on the Bulls 0.2% of the time. Because the odds on the longshots are almost entirely made up from the vig, your edge is much, much worse on the Bulls than the slightly negative edge you’d get on the Nets. I may want to see what happens if I bet in the dumbest way possible, but at least I want to be smart about it! So I set up my “dumbulator” to stake each bet to win one unit, or 1% of my initial bankroll. This way, I would bet 1.12% whenever I bet on the Nets, and 0.007% when betting on the Bulls.

In order to compare the results of the dumbulator to how I would fare by betting in a two-way market with 4.5% hold, I also simulated randomly betting either the Nets or the “Field,” with the frequency of either bet weighted according to their true win percentages. How did I stake the field bets? If I had used the method of betting to win one unit, I would have staked 1.07 units, but that would have put my two-way market sim at a disadvantage. Why? Because the weighted average of the edge on both bets would have been -0.047%, while the weighted average of the edge on each bet for the multiway market is -0.039%. In order to illustrate the full dumbness of my method, I decided to stake the field bets at 0.7 units so that the weighted average of the edge for the bets in the two-way market was also -0.039%. Now that I had all the parameters sorted out, I fired up the dumbulator and plotted the results: 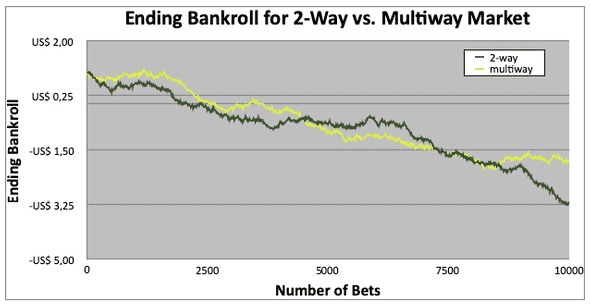 Monsters Under the Bed

While Ed and Matt were brave enough to lay out a testable example of how “bad” it is to bet randomly into a multiway market, they’re far from the only ones who have warned the unsuspecting bettor against walking into such minefields. As my dumbulator proves, however, these markets are nothing to fear. There are no monsters under the bed. The truth is, if you accept the premise of the FLB (and the many decades worth of research done to prove its existence and extent), then you also have to accept that multiway markets must have larger holds than two-way markets. Otherwise, the bettor could get a tremendous advantage in them because the vig on each runner would be tiny. While I’m sure we’d all be happy to see that happen, we can at least take solace in the knowledge that these multiway markets aren’t always a rip-off. Of course, when one book has a 50% hold in the same market that another book holds 18%, you can still warn people about that and tweet nasty things about them.